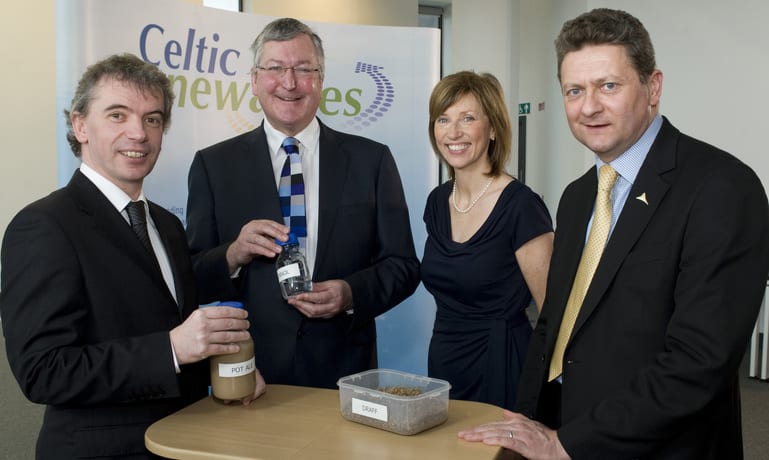 A NEW company has been launched to commercialise a process for producing biofuel made from whisky by-products.
Celtic Renewables Ltd, a spin-out from Edinburgh Napier University’s Biofuel Research Centre, will initially focus on Scotland’s £4 billion malt whisky industry to develop bio-butanol – a next generation biofuel – and other renewable chemicals.

Researchers behind the process say it has “huge global potential” to be adapted to other biological by-products.

Unlike other biofuels, biobutanol – which is now being developed globally – can be used as a direct replacement for petrol, or as a blend, without the need for engine modification.

Celtic Renewables, Scotland’s first biobutanol company, is now working with Scottish Enterprise to produce the fuel from sustainable resources on an industrial scale.

Its fermentation process uses the two main by-products of whisky production – ‘pot ale’, the liquid from the copper stills, and ‘draff’, the spent grains.

Each year the industry produces 1600 million litres of pot ale and 500,000 tonnes of draff.

“The pot ale and draff could be converted into biofuel as a direct substitute for fossil-derived fuel, which would reduce oil consumption and C02 emissions while also providing energy security – particularly in the rural and remote homelands of the whisky industry.

He added: “The launch of Celtic Renewables is a very exciting development and there is huge potential for applying our process on a global scale.”

Celtic Renewables will be officially launched at the University’s Sighthill Campus on Wednesday, 25 January by Fergus Ewing MSP, Minister for Energy, Enterprise
& Tourism.

He said: “Scotland’s whisky has a world-wide reputation for excellence and generates huge benefits for our economy.

“It’s fitting, then, that the by-products of this industry are now being used in an area where we have so much promise – sustainable biofuels.

“Turning our whisky industry’s by-products into raw materials for sustainable biofuels which can be used to power ordinary family cars is an example of the sort of innovative thinking Scotland excels in. I’m delighted to attend the launch of Celtic Renewables, and wish them every success.”

The spin-out has been the beneficiary of Government-related funding at each stage of its development.

The initial research project received £267,000 of support from Scottish Enterprise’s Proof of Concept Programme, while Celtic Renewables has since benefited from a £70,000 Scottish Enterprise SMART: Scotland grant to assist the technology scale-up and commercial feasibility.

In addition, Celtic Renewables CEO, Mark Simmers, joined via the Saltire Foundation Fellowship – a Government and industry backed initiative to align Scotland’s next generation of leaders with promising new companies.

Speaking at the launch, Lena Wilson, chief executive of Scottish Enterprise, added: “Celtic Renewables is a great example of how a company with global growth potential can be created from pioneering research.

“By supporting ideas with real commercial capability, we can help transform cutting-edge knowledge into new high-growth sustainable businesses for Scotland.

“We’ve worked closely with the management team, most recently through our High Growth Start-Up Team, to assist Celtic Renewables with its spin-out and initial funding phases, and we’ll continue to work alongside the company to help it achieve its growth ambitions.”