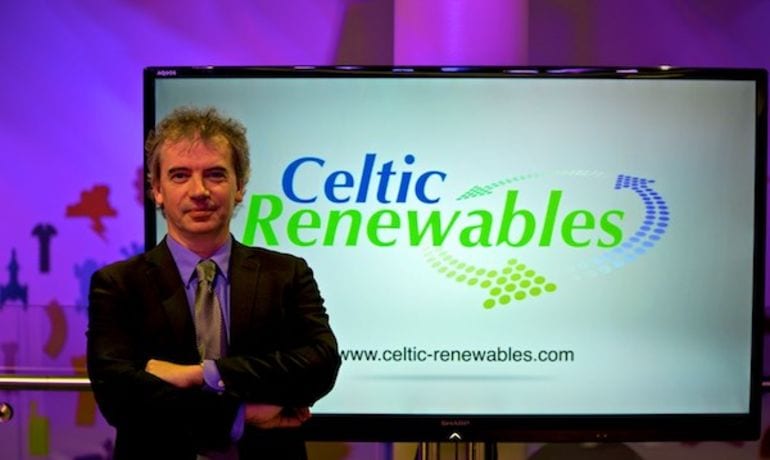 Celtic Renewables, the world’s first company to produce biofuel capable of powering cars from residues of the whisky industry, has received £500,000 in a new round of investment, taking its valuation to £10million.

The company has announced investment worth £250,000 from the Scottish Investment Bank. The investment arm of Scottish enterprise, with a further £250,000 equity stake acquired by an existing private investor.The cash boost was announced at a reception in Edinburgh by Professor Martin Tangney, the founder and President of Celtic Renewables and Paul Lewis, Managing Director of Operations at Scottish Enterprise.

It follows the unveiling earlier this month of the first samples of bio-butanol from the by-products of whisky fermentation using a process developed by Celtic Renewables scientists.

“This demonstration of faith by the Scottish Investment Bank and our private investor takes Celtic Renewables to a new level and brings our share value to £10million.“We have successfully taken a defunct technology and adapted it to current market conditions, attracting the investment and partners required to scale-up to industrial production and prove that this works at scale.”

“I am pleased that the Scottish Investment Bank has given support to Celtic Renewables, a company who are producing such an exciting and innovative product.
“This helps ensure a future where we see less emissions from fossil fuel driven cars and instead have reduced emissions from vehicles powered from the by-products of Scotland’s world-renowned and successful whisky industry.”

“Celtic Renewables is leading the way in the development of the fast growing biofuels sector, and is a great example of how a company with global growth opportunities can be created from pioneering research that has significant commercial potential.

“Scotland is really punching above its weight when it comes biofuels, and the growth of companies such as Celtic Renewables have a key part to play in the sector’s development. Scottish Government recently launched the National Plan for Industrial Biotechnology which aims to help increase industrial biotechnology to £900million by 2025, and will ultimately enable the country to take a significant role in the world’s industrial biotechnology sector.”

Celtic Renewables, in partnership with the Ghent-based Bio Base Europe Pilot Plant (BBEPP), produced the first samples of bio-butanol from by-products using a process called the Acetone-Butanol-Ethanol (ABE) fermentation earlier this month.

The ABE fermentation was first developed in the UK a century ago, but died out in competition with the petrochemical industry. However bio-butanol is now recognised as an advanced biofuel – a direct replacement for petrol – and Celtic Renewables is seeking to reintroduce the process to Europe for the first time since the 1960s, using the millions of tonnes of annual whisky production residues as their unique raw material.

The biofuel is produced from draff – the sugar rich kernels of barley which are soaked in water to facilitate the fermentation process necessary for whisky production – and pot ale, the copper-containing yeasty liquid that is left over following distillation.

• Celtic Renewables were recent winners of the Rushlight Bioenergy Award, and also took the overall Rushlight Clean Energy Award for the most significant achievement towards the exploitation and adoption of sustainable energy.
• Last year Celtic won the Low Carbon Vehicle Partnership’s award for Low Carbon Innovation.
• In 2012 Professor Tangney was named Innovator of the Year by the Institute of Chemical Engineering at the IChemE Awards.
• Professor Tangney studied microbiology at University College Cork and later graduated from Trinity College Dublin with a masters in genetics, before doing a PhD at the Heriot-Watt University
• He also worked with Novozymes as a PhD researcher in Denmark and Finland before he progressed to become a Professor at Edinburgh Napier University where, in 2007, he founded the Biofuel Research Centre, the first of its kind in the UK.
• A bacterial fermentation process known as Acetone-butanol-ethanol (ABE) produces acetone, n-Butanol, and ethanol from starch.
• Industrial exploitation of ABE fermentation started in 1912 with Chaim Weizmann’s isolation of Clostridium acetobutylicum.
• Scotland’s distilleries currently produce around 750,000 tonnes of draff and 2billion litres of pot ale annually
• BBEPP helps companies to prove and scale up processes to manufacture new products and create more sustainable, efficient and economic industries of the future.
• The Scottish Investment Bank is the investment arm of Scottish Enterprise, operating Scotland-wide in partnership with Highlands and Islands Enterprise. It manages a suite of funds including the Scottish Co-investment Fund and the Scottish Venture Fund, which are partly funded by the European Regional Development Fund (ERDF); the Scottish Seed Fund, the Scottish Recycling Fund and the Renewable Energy Investment Fund. SIB is also the cornerstone investor in the privately-managed Scottish Loan Fund and an investor in Epidarex Capital’s life sciences fund. These support Scotland’s SME funding market to ensure businesses with growth and export potential have adequate access to capital. SIB also provides a team of financial readiness specialists to help companies prepare for new investment and more easily access finance.