History in the Jar 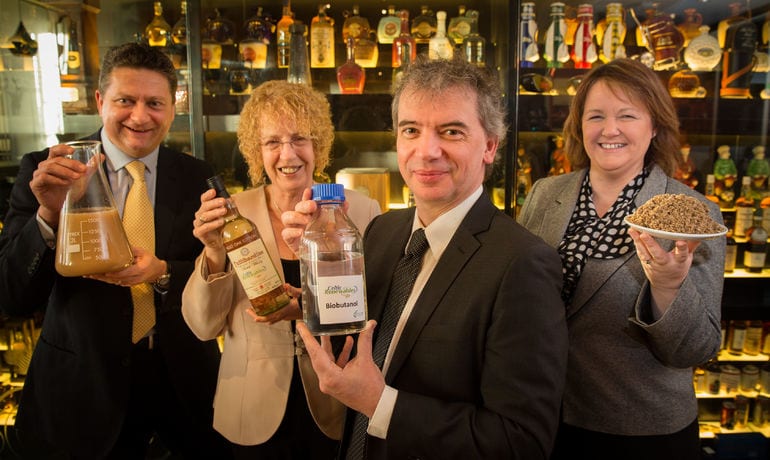 A Scottish company has become the first in the world to produce biofuel capable of powering cars from residues of the whisky industry. Edinburgh-based Celtic Renewables now plans to build a production facility in central Scotland after manufacturing the first samples of bio-butanol from the by-products of whisky fermentation.

Celtic Renewables, a spin-out company from the Biofuel Research Centre (BfRC) at Edinburgh Napier University, has spent the last year developing its process at industrial scale in Belgium as part of a £1million programme funded by the Department for Energy and Climate Change (DECC) under its Energy Entrepreneurs Fund.

Company owners estimate it could be the market leader in an industry worth more than £100million to the UK economy.

The ABE fermentation was first developed in the UK a century ago, but died out in competition with the petrochemical industry. However bio-butanol is now recognised as an advanced biofuel – a direct replacement for petrol – and the Scottish company is seeking to reintroduce the process to Europe for the first time since the 1960s, using the millions of tonnes of annual whisky production residues as their unique raw material.
The biofuel is produced from draff – the sugar rich kernels of barley which are soaked in water to facilitate the fermentation process necessary for whisky production – and pot ale, the copper-containing yeasty liquid that is left over following distillation.

“Showing the world our first sample of biofuel produced from whisky by-products is a proud moment for everyone involved. We have successfully taken a defunct technology and adapted it to current market conditions, attracting the investment and partners required to scale-up to industrial production and prove that this works at scale. This historic sample could herald a new era in sustainable biofuel and the birth of a UK industry worth £100million-a-year.”

“The Bio Base Europe Pilot Plant is designed to support innovative companies like Celtic Renewables to achieve such world leading breakthroughs, as Europe moves away from a fossil based to a biobased economy. This project is a true partnership and we are proud of the role we have played in making biobutanol from Scottish whisky residues. We are excited about the future with Celtic Renewables and we are committed to turn our collaboration into a major success.”

“The process we have perfected takes residues that present a disposal issue to the whisky industry and creates value by producing not only sustainable biofuel but also green chemicals and high grade animal feed. The exciting challenge for us now as a business is to convert our proven technology into a multimillion pound industry, and building our first demonstration plant is the next critical step to achieving that goal.”

The by-products were provided by Tullibardine, the Perthshire distillery that has worked in partnership with Celtic Renewables since 2012. Distillery manager John Torrance said,

“Tullibardine has enjoyed a great relationship with the team at Celtic Renewables and is proud to be the first distillery in the world to have its by-products converted into advanced biofuel. The Scottish whisky industry is expanding, with growth in international markets, and we are very excited about the potential this process offers not just to Tullibardine but to the whole whisky industry”

If successful in their bid, the Edinburgh based company hopes to build its first demonstration facility at the Grangemouth industrial site in Central Scotland, as part of a proposed redevelopment of the area.

“This novel technology takes the by-products of Scotland’s finest export to power vehicles, and it is this kind of world-leading innovation that the Energy Entrepreneur Fund was designed for. The UK is one of the best innovation nations in the world and since 2011 have pumped over £1 billion into low carbon innovation alone. This is a great achievement for the team at Celtic Renewables to achieve this historic milestone in biofuel development.”

“I am delighted to have been invited to be part of the unveiling of this innovative, world-class and exciting product. SE has worked closely with the management team to assist Celtic Renewables with its spin-out, development of its innovative products and initial funding phases, and we’ll continue to work alongside the company to help it achieve its growth ambitions. Celtic Renewables is a great example of how a company with global growth potential can be created from pioneering research and that by supporting ideas with real commercial capability, we can help transform cutting-edge knowledge into new high-growth sustainable businesses for Scotland.”

“Scotland already has a very successful and world-renowned whisky industry which provides enormous benefits for our economy. It is therefore excellent to see the by-products of this industry being used in such an innovative way. The production of biobutanol from whisky residues is a world first and has the potential to help us reduce harmful emissions from fossil fuels. I look forward to the future of this product and will watch with interest as Celtic Renewables continue to go from strength to strength.”

• Celtic Renewables were recent winners of the Rushlight Bioenergy Award, and also took the overall Rushlight Clean Energy Award for the most significant achievement towards the exploitation and adoption of sustainable energy.
• Last year Celtic won the Low Carbon Vehicle Partnership’s award for Low Carbon Innovation.
• In 2012 Professor Tangney was named Innovator of the Year by the Institute of Chemical Engineering at the IChemE Awards.
• Professor Tangney studied microbiology at University College Cork and later graduated from Trinity College Dublin with a masters in genetics, before doing a PhD at the Heriot-Watt University
• He also worked with Novozymes as a researcher in Denmark and Finland before he progressed to become a Professor at Edinburgh Napier University where, in 2007, he founded the Biofuel Research Centre, the first of its kind in the UK.
• A bacterial fermentation process known as Acetone-butanol-ethanol (ABE) produces acetone, n-Butanol, and ethanol from starch.
• Industrial exploitation of ABE fermentation started in 1912 with Chaim Weizmann’s isolation of Clostridium acetobutylicum.
• Scotland’s distilleries currently produce around 750,000 tonnes of draff and 2billion litres of pot ale annually
• BBEPP helps companies to prove and scale up processes to manufacture new products and create more sustainable, efficient and economic industries of the future.