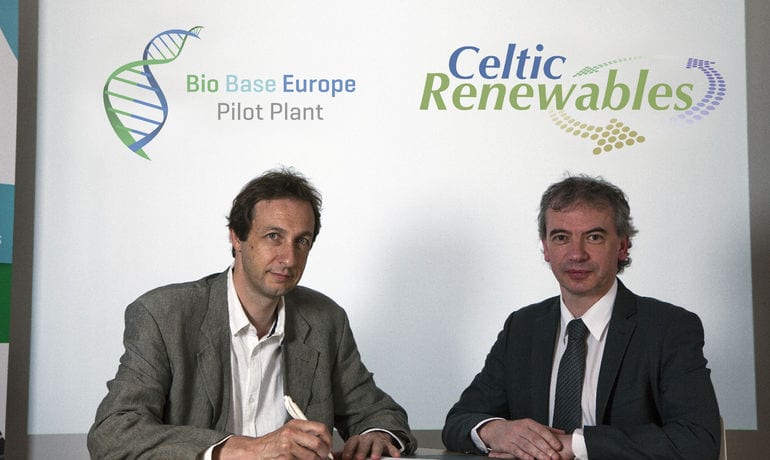 Celtic Renewables, the Edinburgh-based biofuel company, has signed an agreement with Europe’s foremost biotechnology pilot facility to undergo next stage testing of its process to turn whisky by-products into biofuel that can power current vehicles.

The partnership, which will allow the company to develop its technology at Bio Base Europe Pilot Plant (BBEPP) in Ghent, has been made possible by second round funding worth £1.2million, including more than £800,000 from the UK Government, to help meet its ambition of growing a new £100 million-a-year industry in the UK.

Celtic Renewables, a spin-out company from the Biofuel Research Centre at Edinburgh Napier University, has already proved the concept of producing biobutanol from draff – the sugar-rich kernels of barley which are soaked in water to facilitate the fermentation process necessary for whisky production – and pot ale, the yeasty liquid that is heated during distillation.

It will spend the next few months seeking to replicate work done in its Scottish laboratory at an industrial scale.

It is the first company to trial biobutanol technology at the Belgian demonstrator pilot facility and also the first Scottish company to sign a partnership with BBEPP .

Professor Martin Tangney, Founder and President of Celtic Renewables, said the latest developments demonstrated the commitment of government and industry partners to help it meet its ambition to become a groundbreaking company, based in Scotland, with global reach.

“Our ambition to grow a sustainable, international industry from Scotland requires strong partnerships and we are delighted to be working with BioBase Europe Pilot Plant, to help us complete the next, crucial stage in our development,” he said.

Professor Wim Soetaert, CEO of the BBEPP, said: “The transition from the current fossil-based economy towards a biobased economy is essential for industrial sustainability throughout Europe.

“Biobased production is already transforming a broad range of industries around the world and Celtic Renewables, making advanced biofuel and sustainable chemicals from whisky by-products, is exactly the kind of inspired innovation that our BBEPP is designed to support. In this regard the synergy of our partnership is perfect and we are really excited with this opportunity to work with such a forward-thinking company.”

It is anticipated that the work done by Celtic Renewables at the facility will facilitate the production of the world’s first industrial samples of biobutanol derived from whisky production residues, allowing it to be used as a direct replacement for petrol and diesel, without the need to modify engines.

The company plans to build its first commercial demonstration facility in Scotland and it is targeting a proposed £25million fund operated by the Department of Transport to help fund this.

Celtic Renewables recently gained second-round investment of £410,000 in private equity investment and it has been awarded funding worth more than £800,000 from the Department of Energy and Climate Change (DECC) at Westminster.

Professor Tangney added: “This partnership agreement has only been made possible by the immensely encouraging demonstration of continued support from our private investors and a hugely important grant from DECC.”

Michael Fallon, the UK Energy Minister, said: “This novel technology takes the by-products of Scotland’s finest export to power vehicles. DECC’s Energy Entrepreneurs Fund was designed to support small and medium-sized businesses like Celtic Renewables to develop state-of-the-art technologies, products and processes that will help us become more energy efficient. This is a prime example of how innovative technology can flourish with the right support.”

Maggie McGinlay, Director of Energy at Scottish Enterprise said: “The establishment of this European partnership is a significant milestone in the growth of Celtic Renewables. The rapid growth that this company has seen is testament to the value of commercialising the innovative technology coming out of the research base. We are particularly pleased to see a company that we have supported from the technology-development stage achieve such huge success in furthering the commercial product validation. We look forward to continuing our work with the company to realise its global ambitions.”