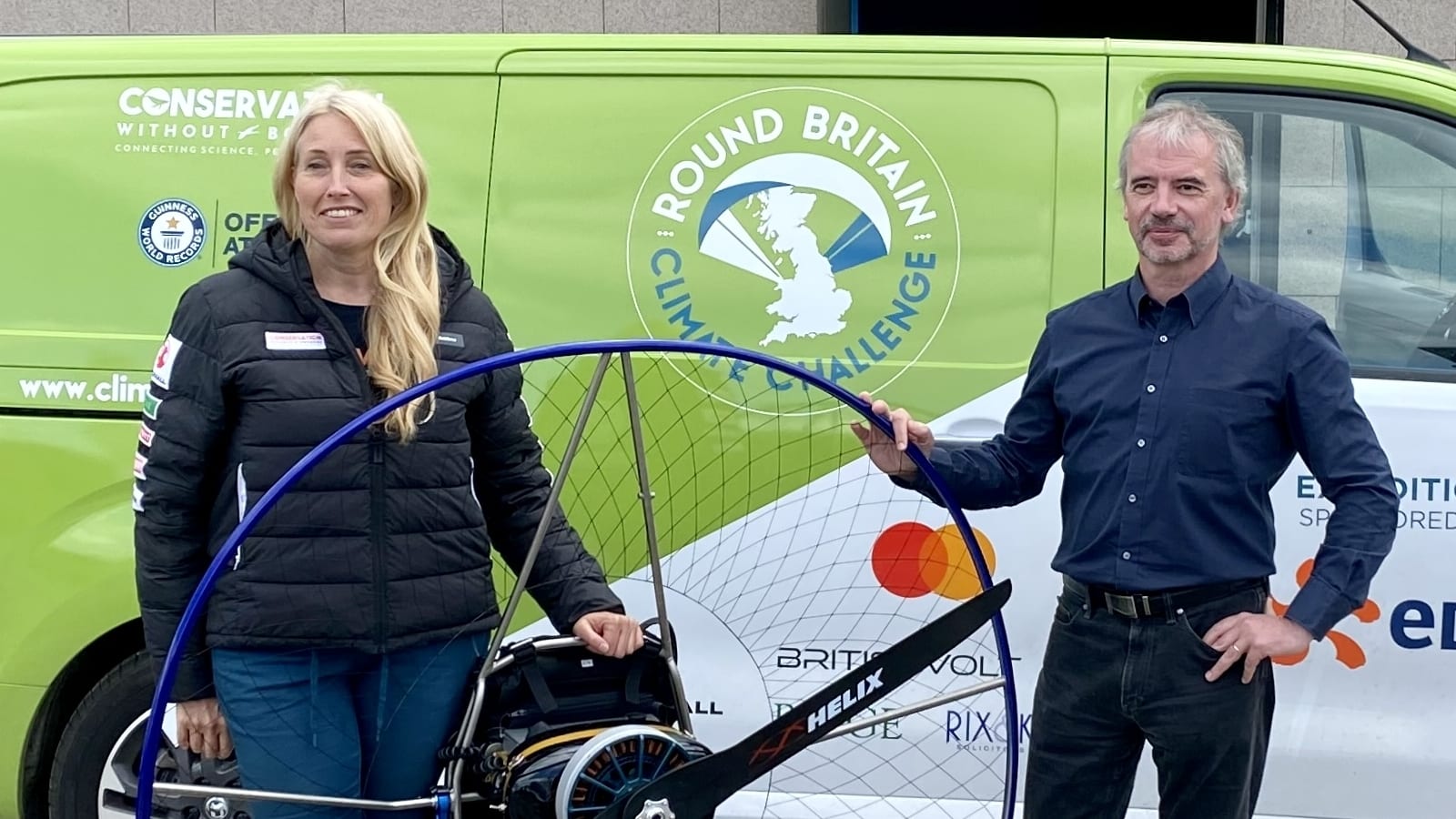 UN Ambassador Sacha Dench and Prof Martin Tangney OBE at the official launch of the Round Britain Climate Challenge.

The Round Britain Climate Challenge is the first-ever circumnavigation attempt of mainland Britain with an electric paramotor – an adventurous expedition created by Sacha Dench (UN Ambassador for Convention on Migratory Species, CMS and Founder of Conservation Without Borders) to draw attention to climate issues at home. ‘Human Swan’ Sacha Dench, known for global expeditions with migratory species, turned her focus to climate change for this expedition after losing her family home in the Australian bushfires.

This groundbreaking 3000 mile plus expedition will travel anti-clockwise around Britain, ending back in Glasgow around 6 weeks later. This daring expedition is designed to inspire and excite the nation to get involved in tackling the climate crisis in the run-up to COP26. Sacha will be landing frequently, talking with, filming, and gathering information from industry, innovators and entrepreneurs, local heroes, communities, schools, farmers and individuals – anybody involved in addressing the effects of climate change in their areas.

Company founder, Prof Martin Tangney OBE, has spoken at a number of recent Conservation Without Borders events to highlight the role of innovation in addressing the climate challenge, and the UN Ambassador plans to visit the company’s biorefinery as part of her expedition. This will be one of her Climate Champions stories and a compilation of these stories will be presented at COP26 in Glasgow in November.

“As a company committed to growing a new green economy, Celtic Renewables is proud to support the Round Britain Climate Challenge. Crucially, Sacha’s daring expedition will focus attention on changing the climate debate away from “why” and toward “how”, as we head towards COP26.”

Sacha will set a new Guinness World Records Title for the fastest (and first) flight around Britain in a paramotor. It will also be a first for an electric paramotor.

A second Guinness World Records Title attempt will aim to inspire at least 140,001 people to take personal climate action between 18 June and 17 July as part of the global campaign Count Us In. On achieving this, every participant will get a badge recognising their contribution to setting a world record.

“I want to capture the imaginations of the young and old, rural and urban, and focus on answers to the climate crisis – not problems - and encourage everyone, to get involved. As well as investigating how climate change is affecting different regions of the country, we will be showing – in a visually stunning and exciting way - what is happing to help cut carbon and preserve and restore our environment.

We’ll be finding the likely and unlikely heroes, discovering where and what works, and Celtic Renewables are a wonderful example of pioneering green innovation. I very much look forward to visiting Martin and the team at the site of their first production facility.”